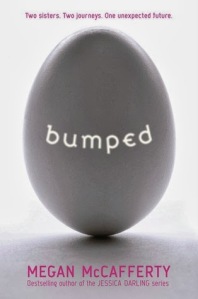 I can’t even remember where I saw the synopsis for Bumped and Thumped, or why I decided I wanted to read them, but I did, and I did, and so here I am, reviewing them.

Twins Melody and Harmony are sixteen years old, but they were separated at birth and adopted. Harmony was raised by the church in Goodside, preparing to be a wife and a mother, where Melody was raised by ambitious parents who want her to get the best possible future.

All this is complicated, however, by the fact that a virus has all but erased fertility in humans who are roughly over the age of 18 – this leaves procreation to the teenagers, who are paid to carry babies for would-be parents – getting pregged is the most important thing a teenage girl can do, and a baby bump is the latest fashion accessory.

Running away from the secrets she’s harbouring in Goodside, Harmony seeks out her twin sister, but when Melody is matched to bump with Jondoe, the world’s most favourite teen stud, responsible for hundreds of preggs, a case of mistaken identity ensures, causing all sorts of havoc for the girls.

Thumped picks up six months after Bumped, where the girls are caught in a deception of global proportions, and pining after guys they can’t have – still hiding secrets, can they keep the deception going?

I read these two books in the space of a few days, and they’re light and fluffy and they certainly have some cute romantic scenes. But the problem with both of them is that they’re dystopia with a truly unbelievable premise. Most of the time with dystopian books, you just accept the basic premise. In Divergent, it was thin, certainly, but this was explained later in the trilogy. With Bumped, though, it’s just thin, and it stays thin. Professional pregging, and teenagers competing to have the biggest baby bump, and knock out more preggs than the next, in return for stupid amounts of money? It smacks of absolute ridiculousness, and doesn’t get any better as the books progress.

The problem I had with these books was that they couldn’t decide whether they were light or serious – the storyline, for the most part, is light and fluffy, verging on the ridiculous. Identical twins, separated at birth! Meeting up for the first time at the age of sixteen! Then a case of mistaken identity with disastrous results! These would all have been fine, albeit melodramatic, if that was all the book was going for, but the added dystopian setting and wider societal structure was too much for the plot to support. 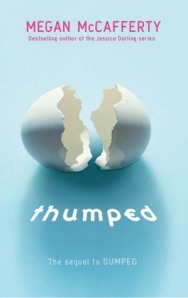 The books could have been a lot deeper and a lot more serious, an examination of that world’s attitudes towards teenagers, parenthood, family bonding, genetic connections vs shared history, all sorts of things, but it kind of dipped into all of these things, and didn’t really hit home on anything.

Jack of all trades, master of none, as they say, bumped and thumped try too hard to be deep and meaningful, when they should have just taken the ‘identical twins separated at birth’ story and transplanted it into a modern-day setting. That would have been a far more enjoyable book, and one which succeeds in what it’s trying to do.

Two stars for both books.
**