If Birds Fly Back – Carlie Sorosiak

I spotted a tweet online a few weeks ago saying that proofs of If Birds Fly Back were available for request, so naturally I requested one. My Kinda Book were kind enough to send me one, and I actually enjoyed it a lot more than I was expecting to. I thought it would be good, but not great, but it was actually wonderfully sweet. 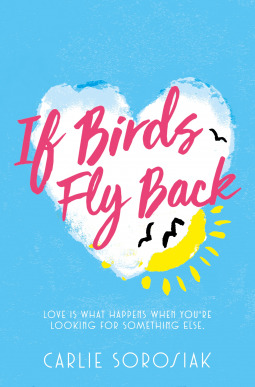 Linny has been living life in black and white since her sister Grace ran away, and she’s scared that Grace might never come back. When Linny witnesses the return to Miami of a cult movie star long presumed dead, she is certain it’s a sign. Surely Álvaro Herrera, of all people, can tell her why people come back – and how to bring her sister home?

Sebastian has come to Miami seeking his father, a man whose name he’s only just learned. An aspiring astrophysicist, he can tell Linny how many galaxies there are, how much plutonium weighs and how likely she is to be struck by a meteorite. But none of the theories he knows are enough to answer his own questions about why his father abandoned him, and why it left him in pieces.

As Sebastian and Linny converge around the mystery of Álvaro’s disappearance – and return – their planets start to collide. Linny’s life is about to become technicolor, but finding the answers to her questions might mean losing everything that matters.

I feel like books with dead/missing sisters are ‘a thing’ that I apparently like to read. I can think of several – Lost Stars, Love Letters to the Dead, The Sky is Everywhere, Vanishing Girls, All the Bright Places, Now You See Me, Trouble is a Friend of Mine, even. And, honestly, I’m not sure I like them all that much. The question then, of course, is why do I keep reading them?

The answer to that, of course, is so that I find gems like this one. I said already that I went into this thinking that it would be a light summer read, and I would forget it within minutes. But it was much more than that. Linny and Sebastian are developed, nuanced characters, and okay, yes, they fall practically in insta-love but that’s what summer romances are about, right?

This book packed an unexpected emotional punch, which left me weeping quietly for the final eighty pages or so. Emotional hit after emotional hit downed me until it was all I could do to actually see the page through the blurring of tears, but I didn’t want to stop because I was enjoying it so much. Linny’s trying to solve the mystery about her sister’s disappearance, while Sebastian is trying to get to know the father he never met, and the two of them fall in love over the course of a summer of fun, romance, heartbreak, and realisations about themselves and their families.

I was expecting a summer romance, and I got a summer romance, but as well as that, I got a whole lot more. I got two beautiful stories of a boy and a girl, their families, their friends, and finding their place in the world, as well as a whole lot of physics knowledge and theories, a lot of film terminology, and a smattering of Spanish words. Maybe too much physics and film, but it might be that I was reading this at the same time as STAGS (review next up), which was saturated with film references, and I kind of conflated them.

Either way, this was an unexpectedly beautiful and emotional book, which I very much enjoyed.

2 responses to “If Birds Fly Back – Carlie Sorosiak”