Once And For All – Sarah Dessen

Queen of YA Sarah Dessen’s books have appeared regularly on this blog, as I find they’re easy to read and thoroughly enjoyable. (See here, here, here and here)

Her thirteenth novel, Once and For All, is set in Lakeview once more (with flashes of Colby), and follows Louna’s last summer before college, working with her mother in her wedding planning business, and struggling with irritating new employee Ambrose. 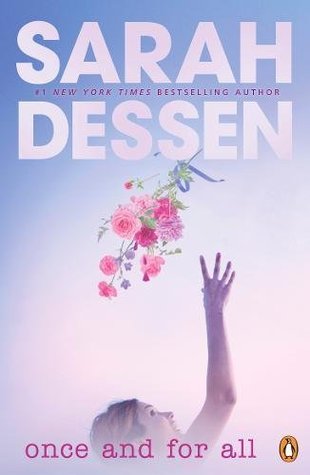 As bubbly as champagne and delectable as wedding cake, Once and for All, Sarah Dessen’s thirteenth novel, is set in the world of wedding planning, where crises are routine.

Louna, daughter of famed wedding planner Natalie Barrett, has seen every sort of wedding: on the beach, at historic mansions, in fancy hotels and clubs. Perhaps that’s why she’s cynical about happily-ever-after endings, especially since her own first love ended tragically. When Louna meets charming, happy-go-lucky serial dater Ambrose, she holds him at arm’s length. But Ambrose isn’t about to be discouraged, now that he’s met the one girl he really wants.

Sarah Dessen’s many, many fans will adore her latest, a richly satisfying, enormously entertaining story that has everything—humor, romance, and an ending both happy and imperfect, just like life itself.

While this probably wasn’t my favourite Sarah Dessen book, it was certainly far from my least favourite. Louna, still reeling from the end of her epic first love, is a fun and cynical narrator, far too young to be so set that nothing lasts too long, especially since she’s in the business of planning happily ever afters.

Ambrose, the irritating, impulsive, serial dating, clear love interest who’s introduced near the start of the book, could easily be a character that I could hate – and indeed lots of reviews I’ve seen have him pegged as far from an interesting character, more like a headwrecker. But actually I found him quite enjoyable, as he’s not a bad character – he’s just more impulsive than many of the love interests in Sarah Dessen books. Still, this departure from the norm was fun, as Ambrose was kind of more exciting than some other love interests in YA contemporaries I’ve read.

I think I was biased towards this book because it’s set mostly around weddings, and I really love weddings, so I was predisposed to like this. But as well as that, it had all of the Dessen hallmarks of a summer, a romance, a friendship, family ties, and a degree of self-discovery which lets the protagonist discover things about herself that she might not have known before.

I was left with a few questions at the end of this book, though. Mostly about Jilly. What was the deal with her having to look after her four siblings all the time? I understand that there’s a bit of give and take in families, and being one of the younger siblings in my own family, I’ve never had to do this, but Jilly seems to spend her entire summer being a nanny to four children who she obviously loves, but gets no benefit out of?

Well, I guess she gets the benefit of her parents making enough money to house and clothe her, but I have to wonder exactly what her parents are intending on doing right after the book ends, when Jilly goes away to college and they suddenly have serious childcare issues.

Also, I felt like the end of the book was quite rushed. There were two time skips in the last twenty pages, and I thought they interrupted the flow of the book – unfortunately, this was the point where the book resolved itself, and I was left very, very slightly dissatisfied with how quickly it was handled. Although it was obvious which way it was going to go, it could have had a bit more exposition behind it.

Also, I felt pretty bad for Ben. Sucks to be him.

All in all, though, I did very much enjoy this. I am very much a fan of Dessen’s work, and will continue to read whatever she produces, but this one doesn’t make the top five of Dessen books, for sure. I wavered between three and four stars, and eventually settled on four, because weddings (seriously, I love weddings) but it was a close-run thing.

3 responses to “Once And For All – Sarah Dessen”