YALC was the source of many, many proofs, but only a few that I was properly excited for. Chief among those was the sequel to last year’s The Call, which I read and enjoyed, and was probably overly harsh about because I was in a bad mood the week I read it.

So when I did pick up a proof of The Invasion, after lurking around the David Fickling Books stand for hours, I was more than chuffed. It took me a while to get around to reading it, because I wanted to do this book justice, and read it when I was in the mood to read it. So that time came last week, and I was not upset that I had waited.

The Invasion (The Call #2) – Peadar O’Guilin

The David Fickling cover art hasn’t been released yet, I don’t think. The only art on Goodreads is the Scholastic cover, and my proof didn’t have the final cover art. But I’m looking forward to seeing what kind of swirls show up on the eventual cover art! 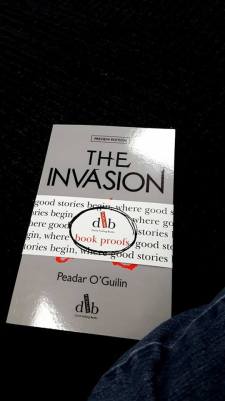 After so much danger, Nessa and Anto can finally dream of a happy life. But the terrible attack on their school has created a witch-hunt for traitors — boys and girls who survived the Call only by making deals with the enemy. To the authorities, Nessa’s guilt is obvious. Her punishment is to be sent back to the nightmare of the Grey Land for the rest of her life. The Sídhe are waiting, and they have a very special fate planned for her.

Meanwhile, with the help of a real traitor, the enemy come pouring into Ireland at the head of a terrifying army. Every human they capture becomes a weapon. Anto and the last students of his old school must find a way to strike a blow at the invaders before they lose their lives, or even worse, their minds. But with every moment Anto is confronted with more evidence of Nessa’s guilt.

For Nessa, the thought of seeing Anto again is the only thing keeping her alive. But if she escapes, and if she can find him, surely he is duty-bound to kill her…

I really, really enjoyed this book. Although I was shocked by the constant assertions that Nessa is actually short for Vanessa (I don’t know why I was so shocked, because it was mentioned once in the first book, but apparently I didn’t retain that fact), I was chuffed to dive back into the creepy, grey world of an Ireland cut off from its neighbours, and plagued by the ever-approaching thread of the Sídhe entering the many-coloured land.

Nessa and Anto went through so much in the first book, they really deserve to just be together and enjoy the rest of their lives, but obviously that isn’t going to happen for them. So they’re plunged into new and greater threats and dangers as the Sídhe break into the human world, and Nessa is accused of being a traitor. With a host of new characters and the reappearance of many old ones, this was a massively enjoyable and very cleverly plotted second half of the story of the Sídhe.

There are actually three protagonists in this story – Nessa, Anto, and Aoife, who also played a major part in the first book. I don’t understand why she wasn’t given a mention in the blurb, because she’s just as major a player as the romantic leads, and she deserves more credit, because she’s super.

All three of the main characters are young, confused, scared, brave, and fighting for their lives in a world ravaged by the laughing Sídhe. I loved pretty much every word of this book, and was utterly chuffed with the ending – what a superb way of bringing together everything that had been built up over the previous two books!

I will definitely, definitely be looking out for more work from Peadar, as his grasp of the weirdness of Irish legends and the frailty and strength of human relationships allows him to draw a world which is immersive and thrilling, and believable at the same time.

PS – Totally unrelated to the content of the books, the author, Peadar, is really lovely and chatty on Twitter, and very nice in person as well.