The same day that I went to see Garth Nix in Forbidden Planet, he was co-signing books with Sean Williams.
Now, this is largely because they have co-written a series, but I did not know this, because they are children’s books, and I only read YA fiction. I might not read for my age group, but damn it, I’m not going too much lower!
Ha, I kid, I just didn’t know.
I had never heard of Sean Williams before, incidentally.
But while I was waiting to meet Garth Nix, I picked up a copy of Twinmaker, Williams’ new novel, which was also on sale there. It was actually the first chance anyone had to buy Twinmaker, which is pretty damn cool.
I was bored, and I decided I’d pick up a copy of this too. Plus, I got it signed. Very cool, check it out: 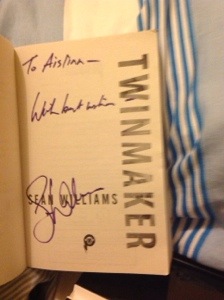 Twinmaker – Sean Williams
Anyways. After the trauma of reading an actual book (A Confusion of Princes), I waited a while before reading Twinmaker, and read all the Riordans in between. I can only deal with being away from the Kindle for so long. And Twinmaker is a hefty enough book.

Anyways. I got started on Twinmaker I think, three or four days ago, and finished it today (I don’t always review in order, hence why Riordan and Nix aren’t reviewed in the order I read them). Twinmaker was excellent. Much better than I actually thought it would be!

So Twinmaker: the blurb reads as follows.
You are special.
You are unique.
And you have been selected.

The method is simple.
Improvement is certain.
You can change anything.

If you were given the chance to change something about yourself, would you? Should you? Clair is pretty sure the offer in the ‘Improvement’ meme is just another viral spam, though Libby is determined to give it a try. But what starts as Libby’s dream turns into Clair’s nightmare when her friend vanishes.

In her search for answers, Clair seeks out Jesse – a boy whose alternative lifestyle might help to uncover the truth. What they don’t anticipate is intervention from the mysterious contact known only as Q, and being caught up in a conspiracy that will change everything.

That was what I had to go on. So I decided I wanted it.
I’m not gonna go too far into the plot, because that makes reading the book yourself no fun, but suffice it to say that it had enough changes and twists and happenings to keep me really interested. The love interest was quite convincing too.

What really interested me about this book, though, was that it read a bit like a cross between A Confusion of Princes, which I had read the previous week, and Scott Westerfeld’s Uglies trilogy plus one.
It had all the augmented vision and embedded systems of A Confusion of Princes – although they were contact lenses connected to the internet rather than a psychic connection to an Imperial Mind, combined with the matter construction and throwaway culture of Uglies. As well as that it had the improvement idea which is a central tenet of the Uglies trilogy, combined with the messaging and popularity system which we saw in Extras – like a super-advanced version of Google Glass. The science behind it was (to my plebian eyes, anyways) really well backed up as well. It would appear that d-mat is something of a specialisation of Williams’.

Incidentally, while I knew that Williams and Nix obviously had a link, since they co-write some books, when I read the Author’s Note at the back, Scott Westerfeld was one of the people thanked. I wonder do they just have little conferences where they discuss things which they should put in books which will make Aislinn really happy? I like to think they do.

My only complaints about Twinmaker – the ending seemed a little rushed, especially the last two or three pages. And I have to wait a WHOLE YEAR for the next book to come out. I HATE being left on a ledge like that!

So FOUR STARS for Twinmaker, and an enthusiastic recommendation from me.
****